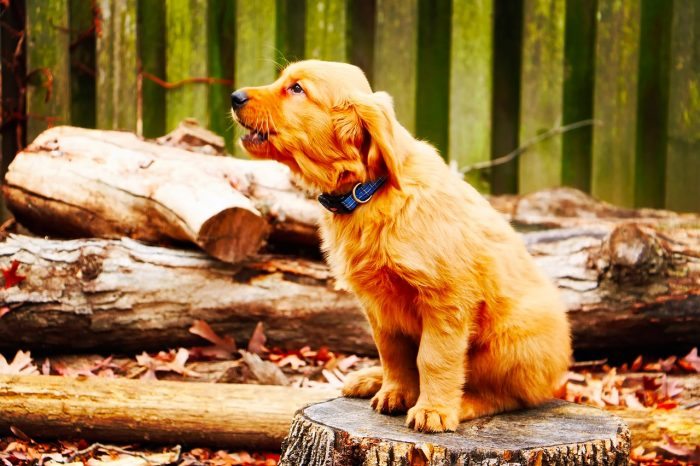 Dogs howl as a means of communicating with humans and other animals. Some dogs also howl in response to intense emotions, physical discomfort, boredom or high-pitched noises.

Just like their cousin the wolf, undomesticated dogs howl in the wild as a way to stay in touch with other members of their pack. Dogs are social animals that have a keen need for reassurance that their pack members are nearby and safe. An instinctual form of vocal communication, howling helps wild dogs locate absent pack members and help them find their way back to the pack if they become lost. The high-pitched, plaintive tone of howling can travel long distances, so it functions as a kind of auditory compass to help lost dogs locate and reunite with their pack. Wild dogs may also howl to warn other animals to stay away from their territory.

Just as wild dogs use howling to reconnect with pack members that go astray, pet dogs may howl when their family members leave the house to ensure that their owners can find their way home. Although this behavior is commonplace, if howling becomes excessive and occurs every time the owner leaves for work or school, it may be a symptom of separation anxiety. Howling caused by separation anxiety is usually accompanied by other signs of depression or anxiety, such as destructive behavior or lapses in housetraining. In the absence of other obvious indicators of separation anxiety, dog owners may only learn about their dog’s howling from neighbors who hear the dog’s distress cries when its owner is absent.

While many causes of howling are innocuous, prolonged or unusually loud howling can become a problem if it disturbs household members or neighbors. Apartment dwellers, for example, may find that their dog’s howling causes tensions between neighbors if it intrudes on other residents’ ability to sleep or enjoy their homes in peace and quiet. Boredom may set off a session of howling in a dog left alone all day long. This form of howling should give the pet owner a strong indication that the dog needs more mental and physical stimulation, such as a morning run or a toy that requires the dog to use problem-solving skills to retrieve a treat. If these steps do not resolve the excessive howling, a visit to a dog trainer or animal behavior specialist may be in order.

Just as some humans are more talkative than others, some dogs have a tendency to howl frequently when they want attention from their owners or in response to hearing or seeing other dogs. During a visit to the dog park, for example, dogs often howl to say “hello” to other canines they encounter. This form of howling is not a cause for concern unless it alarms other animals and their owners.

Some owners notice that shrill noises such as ambulance sirens trigger their dog’s howling. Even singing or instrumental music may set off a bout of howling, particularly if the music is played at a high pitch. Experts theorize that dogs may mistake the music for the call of another dog, and howl in response.

Illness or pain can also induce howling. In this case, the dog’s howling may be an attempt to let its owner know that it is experiencing discomfort. Any sudden change in behavior, including an increase in vocalizations such as howling, should prompt a consultation with the veterinarian to investigate the cause. Since dogs may also howl to let their human family members know about a potential danger, such as fire, a snake or the presence of an intruder, it makes sense to be attentive when dogs exhibit uncharacteristic howling.

Problem howling often requires a program of desensitization and counterconditioning training, through which the dog learns to tolerate a stimulus that usually triggers howling. A trainer who is well-versed in handling problem howling can be a big help. Don’t expect miraculous results overnight though. Desensitization and counterconditioning programs can take time and a lot of patience to overcome a dog’s primal desire to howl.