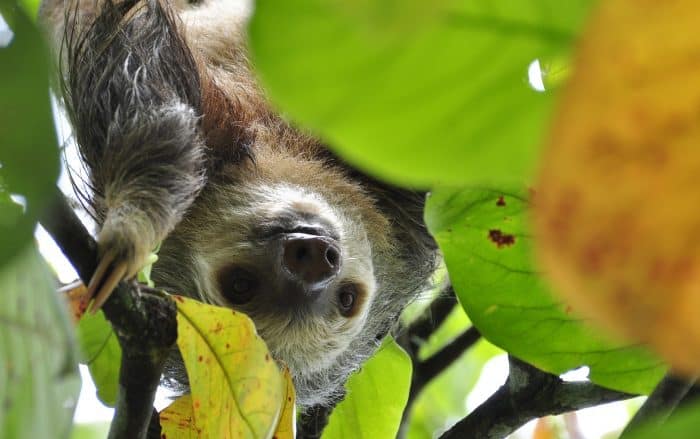 Sloths are mammals that belong to two sloth families: Bradypodidae (three-toed sloths) and Megalonychidae (two-toed sloths). Sloths live in the wild in Central America and South America, Panama, Costa Rica, and Brazil, within the tropical forests that are found there. They spend most of their time in trees.

Sloths originally lived in North America, but as the climate changed, they moved farther and farther south, settling into the warm tropical forests of Central and South America. They are born in trees and they stay in the tree branches, spending almost 90% of their time hanging upside down.  They only come down to defecate (once a week), look for a mate, or to establish more territory, if necessary. They like to sleep in the fork of a tree, curled up into a tight ball. Sloths living in the wild generally sleep 10 hours or less in a 24-hour period, but those found in captivity have been known to sleep up to 20 hours every day. Although they generally will occupy more than one tree during their lifetime, they have been known to spend their entire lives in the same tree where they were born.

One species of sloth, the pygmy three-toed sloth, is becoming endangered and could face extinction in the wild. Its habitat is being drastically reduced because humans are cutting down the red mangrove trees where the sloth lives. Their populations are also being reduced by poaching, as they are hunted and killed by humans for sport. Today, sloths can be found in many zoos around the world, but their survival in the wild is uncertain. If current trends continue, with their habitat being further and further reduced, some estimate they will be completely wiped out in the wild within the next few years.

What’s The Difference Between a Lamb vs Sheep